About Waxtaan by Compagnie jant-bi,  work that reconfigures and re-contextualizes traditional African dances from around the continent, creating a sharp commentary on politics in Africa. Accompanied by live musicians, Waxtaan also celebrates Africa’s rich history and the wealth of dance handed down from generations past.

First and foremost I just wanted to say that it took a bit just to even find the Mandeville Auditorium to watch this performance. It was definitely a journey asking students to lead me to the right direction of this place. UCSD is a big campus and only familiar with the RIMAC center which is their main basketball gym because I used to play tournaments and watch my friends play for UCSD.

So finally arriving at this event, the first thing I notice is the color scheme they have going on while the dancers are performing. They also had live african drum players to accompany the dancers. The performers had such energy and you could see the physicality displayed through their dance. It was really interesting to watch because these africans dancers would dance so fast to this drum beat. After really trying to focus on the performers movement and thinking about how they were dancing, I obviously knew that they were displaying their african roots through their performance. What intrigued me while watching these performers was that when I really focused on the movement I could see a breakdown of bits and pieces of dance of michael jackson and james brown. Although these dancers were dancing at such a rapid pace, their movement followed the pace of the upbeat drums. It took me awhile to really notice certain movements from these performers that show reminiscence of michael jackson and James Brown. I could definitely see how these traditional african dances evolved to movements to which Michael and James Brown perform. Their were several dances which I perceived as different aspects of the african culture.

I stayed afterwards and they had an post interview with Compagnie jant-bi and one of the dance performers going in depth about their dance sequences. It all made sense after listening to the post-interview and them talking about the different African dances to portray Africa’s politics and culture. 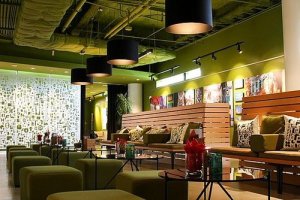 Their was also an after party which i attended at a place on campus called “the loft.” The after party consisted of the performers and people who watched the performance. It was interesting being able to be in the same room with these performers and see them dance to modern music we listen today. I definitely enjoyed myself and danced especially the fact that I got 5 dollar large saki!

10 Dec This entry was published on December 10, 2010 at 11:10 pm and is filed under Film/Video/Animation Projects, Graphic Design. Bookmark the permalink. Follow any comments here with the RSS feed for this post.